This is Alyssa's story of the birth of her baby boy, Judah. Alyssa is a birth doula, and she chose to birth her second baby at home with the support of a private midwife. After a fast labour of only an hour and half, Judah was born into the water. The family spent the morning cuddling on the couch and drinking coffee - what a beautiful example of normal, family-centred birth! 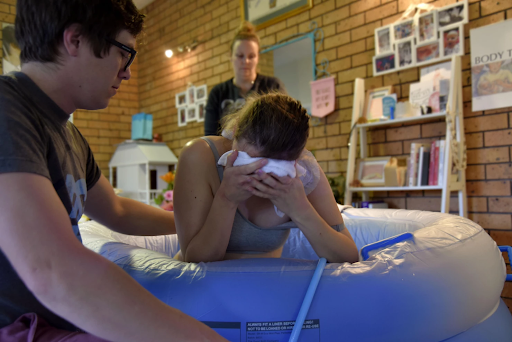 I had contractions sporadically over the Saturday and Sunday, so was hopeful that we’d be meeting bub soon, but also kept trying to remind myself that this could go on for another week or so. On Monday Ben worked from home, I’m grateful he has that flexibility. I had no pains or twinges all day.

I spent time soaking up my 3 year old daughter Millie and being outside in the sunshine. Millie was quite clingy and not herself, hindsight says she probably sensed life was about to change. I had to rock her to sleep for her day sleep, I haven’t done that since she was a small baby. Rocking a 3 year old on a 39 week belly was interesting, haha! I laid with her for a while and it was so lovely.

That night I had a crazy painful sharp stabbing feeling in my cervix - lightening crotch. I didn’t think too much of it as I knew pre-labour can take ages so I just went about my night and trying to get the house ready for our homebirth and new baby. I messaged my midwife, Lou, to let her know, and we texted back & forth briefly.

On Tuesday at 5:48 am I woke up feeling very uncomfortable. I thought maybe a full bladder or more pre-labour. I went to the toilet and by the time I was heading back to bed I knew, today was the day. I woke Ben up (eventually haha! Took some shaking and talking quite loudly) and said I was heading for the shower and I wanted him in there in case I needed anything or for him to call our team.

Millie woke up at some point (sooo much earlier than normal) so we got her started with breakfast and I got some clothes out. I messaged my photographers and my midwife. I had messaged my midwife before the shower, just to give her a heads up and me peace of mind, haha! At 6 am I messaged my cousin Jennifer who was coming to take photos (she also took photos at my daughter’s birth), and at 6:22 I messaged Natalie, my photographer and friend. All three messages say “today’s the day!” Haha!

Ben called Jennifer and Natalie for me, Nat headed straight over and Jen organised for her kids to be watched (thanks to their lovely neighbour!) and headed over.

I messaged back and forth with my midwife, Lou, discussing when I would need her to come over, how contractions were going, etc. I hadn’t downloaded an app to time the contraction so did that before I jumped in the shower so I had some idea of what the pattern was.

Natalie was the first to arrive, and she was amazing, straight into taking photos and I’m pretty sure she also helped with Millie.

I messaged Lou at 6:50 asking her to head over, I remember thinking, it’s probably too early but I really want that pool set up and filled, so she finished getting ready and headed over. She arrived just after 7am.

I was labouring outside on our back deck, it was so nice being outside in the cool morning air, listening to the birds start their day. I couldn’t quite find my rhythm or a position that seemed to help with the contractions. My first labour I stomped and walked, this time I just swayed and rocked. I tried squatting, instant regret haha, it hurt so much more.

At some point Millie had headed upstairs to my parents’ place to hang out with Nanny, she did come back down and was so inquisitive about everything. She was super helpful and got my drink bottle for me and even told our dog to be quiet at some point, haha! By this point I was feeling so much pressure and headed inside for the toilet, I’m guessing it was around 7:25 am. Millie didn’t like seeing me pushing and moaning on the toilet so Jen (who I don’t actually remember arriving, just appearing at some point!) took her upstairs to Nanny.

At 7:30, Lou asked if my waters had broken and I said nope, then another contraction came and my body pushed and POP went my waters. Such an audible and obvious pop, so good. Louise laughed and said, “there they go!”. Natalie and Louise were running buckets of cold water to try to cool the pool down, and I told Lou I really wanted to be in there. She gave me the go ahead and then I had to waddle my way between contractions from the toilet to the pool and climb in, haha! Nothing easy about that when you are close to crowning.

I managed to get in, but it was still a bit too warm so I leant on Ben and used him when I needed to bear down. I remember feeling so hot but being barely able to communicate, I did manage to get across that I wanted cold washers on my face and neck. They felt so good.

I lowered myself into the pool and groaned my way through pushes. I told myself I needed to redirect my energy and concentrate on breathing and easing bub out. I didn’t want to rush this process, I wanted to let my body do its thing and try to prevent tearing.

At 7:44, out came our baby and I picked him up, unwrapped the cord from around his neck and snuggled him onto my chest. We didn’t know his gender, so I asked Ben to go upstairs and get Amilia so we could all look together. 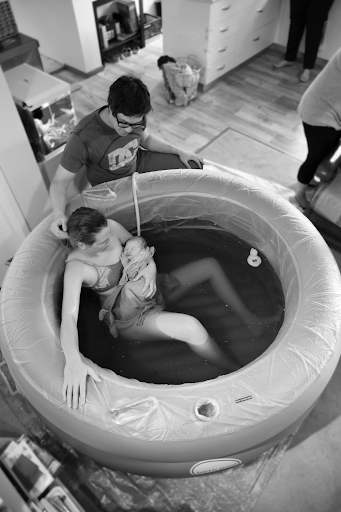 About 30 seconds to a minute after he was out, our second midwife Talia walked through the door.

Amilia and Ben came down and had a look and a chat, and after a few minutes we had a look to see if bub was a boy or a girl. We saw boy, and I said “Happy Birthday Judah”. Such a good moment. Amilia was a bit crushed that it wasn’t the sister she was adamant she was getting, but has fallen so in love him. She told me it’s fine because the next baby will be a girl (it wasn’t a girl either).

I sat in the pool cuddling and feeding, breathing through the contractions trying to birth the placenta. After a while I stood up and helped it along with some gravity. The girls wrapped us up in a bunch of towels and helped us to the lounge. Ben headed down to our local cafe to get everyone some coffees while Judah and I chilled on the lounge. We did delayed cord clamping, used a gorgeous tie from Julie at Blissful Herbs, and I cut the umbilical cord and Natalie and Jennifer took some photos of Judah, the cord and placenta. Millie had a beautiful bracelet that matched Judah’s cord tie, Ben tied that on her wrist later in the morning.

Ben was so impressed at the state of our house when he got home, the pool was packed away, towels in the wash and things packed away. We had the best team!

Mum came down and met him, he was weighed and measured (weighed three times because none of us believed how big he was, so much bigger than our first bub), he had some skin to skin with Ben and received his first needle while I had a shower and then back to me for some cuddles and feeding. It was all so relaxing being in our own home and chilling with our babies. 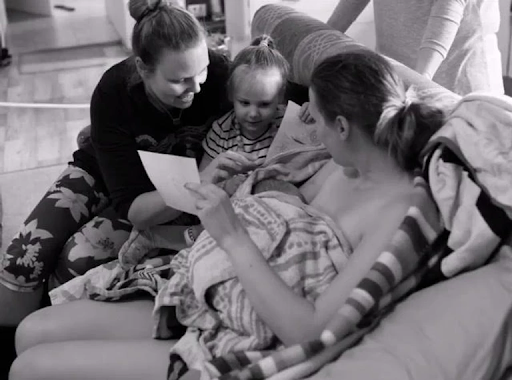 During my shower I felt quite faint, so I called out to Lou, within seconds her and Talia were in the bathroom checking on me, helping me shower safely. I felt so supported and safe the entire morning. All rugged up in comfy clothes, in our own space, everyone left slowly throughout the morning and we just relaxed and rested all day. It was nice not having to worry about visitor hours or Ben having to leave to go home, we were all together, learning about our newest addition at the same time.

Stay connected with news and updates!

Join our mailing list to receive the latest news and updates from our team.Don't worry, your information will not be shared.

We hate SPAM. We will never sell your information, for any reason. 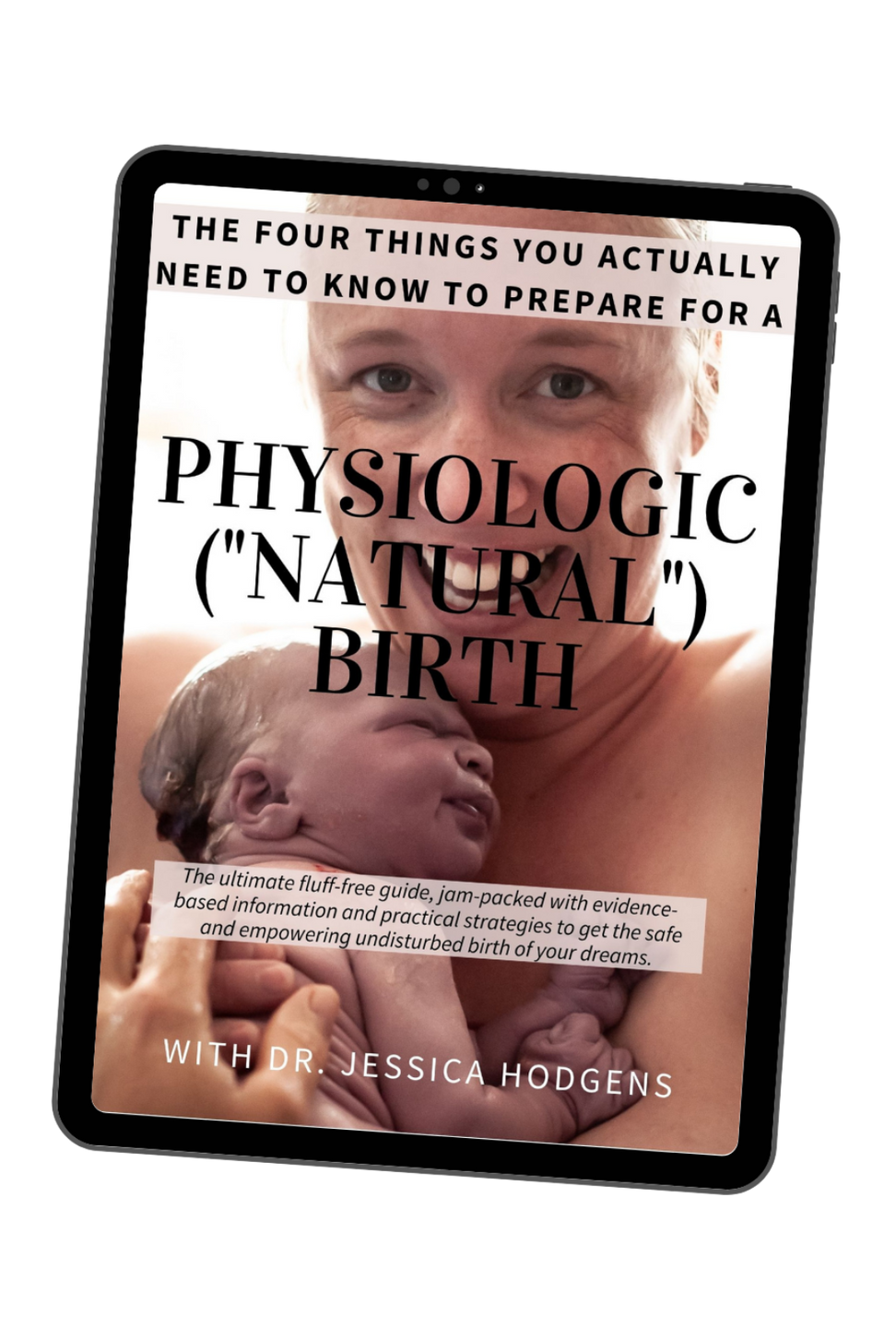 Have your got your free guide yet, mama?

Get your copy of 'The Four Things you Actually Need to Know to Prepare for a Physiologic ("Natural") Birth'. It's the ultimate fluff-free guide, jam-packed with evidence-based information and practical strategies.

We won't send you spam. Unsubscribe at any time.